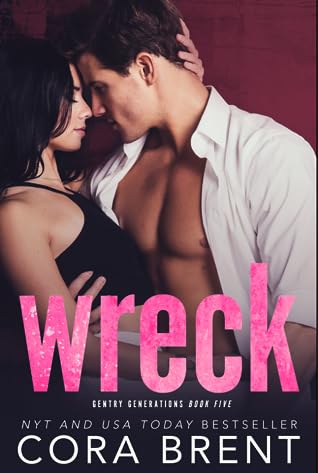 In the time since Thomas Gentry’s career as a professional baseball player was shattered, along with his pitching hand, he has struggled to discover his new direction in life. Becoming an adrenaline junkie provides the only excitement he can muster up in his now stagnant existence… until he meets a woman who helps him feel again.

Gracie Ferraro possesses her own broken spirit. With her past mistakes still lingering, completely fresh and raw, she has been punishing herself instead of moving on. And while meeting a man like Thomas makes Gracie want things she could never deserve, he may be the only man who can help her see just how far she’s come from being that once naive and easily manipulated teenager.

Wreck was an emotional and heart mending romance between two characters whose lives seem to be wrecked beyond all repair. Thomas has lost his chance at playing pro-baseball, and Gracie threw her talent for the violin and her family away in one rash decision. But, when they meet each other, they will soon realize that finding true happiness may be more attainable than they ever realized.

Thomas’ heroic sacrifice left his body battered and broken, and although he would never take back protecting the people he loves, he can’t help but think he could have done more. Living with regret for the state of his career and what he has lost, he spends his days as a shell of his former self, and puts himself in danger to feel even the smallest bit of excitement.

Gracie has lost the love of most of her family, except for her uncle who has always been there for her. But now, he needs her to help take care of him and his lawn care business while he is unable to do so, and Gracie would do anything for the man who has never hesitated in his love for her. With her inability to overcome the mistakes she once made, when Gracie meets Thomas, she finally feels the impact of what the smallest sliver of happiness can do.

I loved the plot of this book, and while I felt there was a lot to Gracie’s story we were missing, I adored the journey they worked through, together. As always, the amazing Gentry family does what they do best and embraces a person who can truly appreciate their devotion and acceptance, which is sure to warm even the coldest of hearts.

Thomas and Gracie find a shared emptiness in each other which helps them both to heal in a way that their loved ones could never understand. This was a great read, which produced yet another fabulous Gentry couple!