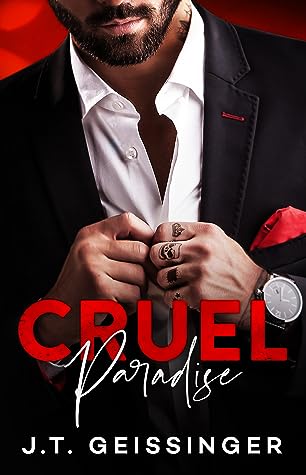 Juliet Jameson and her two friends are a modern day Robin Hood. Stealing from the rich and slimy, and in return donating their haul to the less fortunate. Unfortunately, when you’re a repeat offender thief, eventually you’re going to get caught…

Killian Black is not a man anyone wants to mess with, so when he finds his latest adversary is a woman… he is utterly intrigued. But there is so much more to Juliet than meets the eye… and Killian wants to know every single part of her…

Cruel Paradise was a captivating, kindle-melting, ultra-sexy read! Juliet and Killian may share an undeniable attraction, but Juliet absolutely refuses to have any association with a man like Killian. And while Killian is assuredly dangerous and vile, he can also can also be very, very persuasive… and sweet?!

Juliet has been hiding from the world of her father for many years. Growing up under the thumb of organized crime, she is adamant in her refusal to ever subject herself to that kind of life, ever again. But Killian’s infatuation and his complete devotion to all things Juliet is not going away any time soon… no matter how much Juliet pretends she doesn’t return his feelings…

Killian is not the man Juliet thinks he is. Not only is he pretending to be his twin brother Liam, but his role of head of the Irish mob is a cover for what he really is. Unfortunately, until Juliet gives him her complete trust, Killian is unable to share that the things which may be deal-breakers in their relationship, aren’t what they seem, at all.

I loved this book so much!! Juliet and Killian’s dynamic was sexy, fun and scorching hot! I adored Juliet’s utter refusal to give in to Killian, and the complete lack of nerve she had when it came to insulting him… right to his gorgeous and lethal face! She also showed her incredible strength and ability to handle anything in the face of inexplicable danger.

I have been infatuated with Killian since I first encountered him in the Dangerous Beauty series! He has proven to be cunning, brilliant, and outright fascinating, but in this book, we also get to see Killian’s soft, and downright poetic side! From his irresistible alpha attitude, to his prowress in the bedroom, the whole Killian package was everything I had ever hoped it would be!

Read more from the series!

Meet Killian before his HEA!