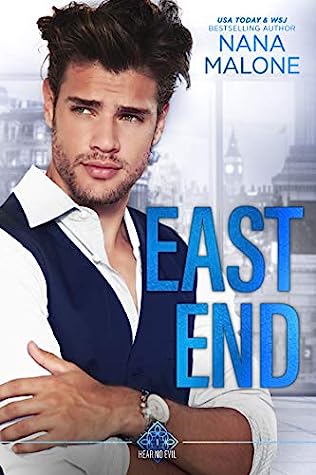 Agent Nyla Kincade takes her job at Interpol very seriously, and her latest case has her on the tail of the incredibly secretive and privileged, London Lords.

East Hale is a thief… and a fantastic one at that. And while he should be worried about the Interpol agent who has suddenly taken a great interest in his extracurricular activities… all he wants is to finds ways to get closer to her…

East End was a captivating opposites attract romance filled with intrigue, antagonism, and sizzling sexual tension. When Nyla and East aren’t going head to head with their fighting skills, they find an attraction that is as inconvenient as it is undeniably powerful. But a relationship between the police and a thief? Never going to happen…

Nyla is a brilliant, independent woman who dedicates her life to solving her cases and at the same time, aches for her fathers approval. With her always reliable intuition and a very strong hunch, Nyla delves deep into solving a case involving the London Lords… and finds more than she was bargaining for when she meets the always charming, East Hale.

East is a part of the Elite, a highly secret society which has contributed to it’s fair share of mysteries and intrigues. Finding the Interpol agent tracking his  whereabouts should be a problem for East’s not-so-above-board activities, but he finds that he enjoys sparring with Nyla almost as much as he might kissing her…

This was such a great read… with compelling characters, a highly complicated relationship, and steamy sex scenes that hint at the promise of so much more to come! I can’t wait to see what comes for Nyla and East in their next book, because while East End concludes with a cliffhanger, being treated to more from these two is an absolute necessity.

More from the Hear No Evil trilogy!