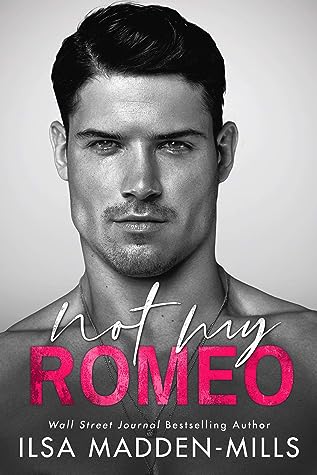 Who accepts a blind date on Valentines Day!? Elena Riley, that’s who. She agrees to meet with a (hopefully) mild and easy going, weatherman for a meal and some much needed company. But Elena can’t believe her eyes when there is a way too hunky and irresistible man waiting for her instead. Sexual attraction abounds and Elena goes home with him.. only to find out her weatherman isn’t quite who she thought he was…

Jack Hawke is a famous NFL quarterback who is completely thrown to discover a woman who doesn’t seem to know who he is… and isn’t trying to get closer to him for his fame as a result. Being dishonest with Elena wasn’t the best idea… but there’s something about her that Jack just couldn’t let slip through his fingers… and still can’t…

Not My Romeo was a seriously steamy and utterly delightful, opposites attract romance! Elena and Jack have an undeniable attraction, but a relationship between them could never work. He is famous, closed off and distrusting, and she likes her quiet, small town life, and to avoid her heart being broken into tiny little pieces.

Elena is a librarian by day and a secret lingerie designer by night. Living her contented life in the small town of Daisy, Elena has her family, her career and great friends. What she doesn’t have is room for is a professional football player and the mess that wanting anything more from him would make of her heart…

Jack went through an extremely difficult childhood, and finds it hard to trust… anyone really. And when the last relationship he had resulted in a scathing tell-all book, Jack has his guard up now more than ever. The infamous NFL quarterback does little to expel the rumors about him, but it doesn’t take long for Elena to figure out that there is much more to Jack than he shares with the world.

I loved this book so much! The characters showed incredible depth and dimension, and made rooting for them incredibly easy. Despite having very little in common, Elena and Jack shared a scorching connection and a hilarious friction studded rapport that I simply could not get enough of! I adored Elena’s family dynamic and the growth all of the characters showed throughout this read.

Read more from The Game Changers!