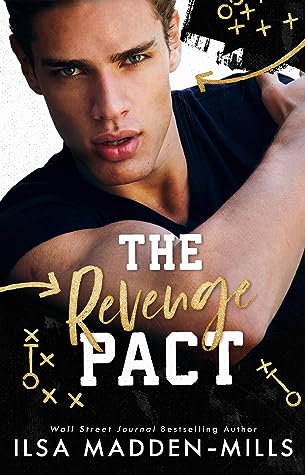 Just about everyone at Braxton College wants a piece of football god, River Tate… except the one girl that River desperately wants, but definitely can’t have…

Anastasia Bailey is at a crossroads in her relationship, and basically, just her life in general. And while she may be attracted to a guy who isn’t the one she’s dating, she is steadfastly loyal to her boyfriend… and besides… she loathes River anyway…

The Revenge Pact was a forbidden romance set against the backdrop of college fraternities and uncertain futures. River and Anastasia share an unspoken attraction and a plethora of reasons as to why they can never act on it, but when Ana suddenly becomes single, all of their reasons start to slowly matter less and less…

Ana was a kind, quirky and genuine character that was quite simply, a breath of fresh air. Her inherent loneliness did a lot to shape the relationships she forged, and she always seemed to be doing what she could to take care of others. And after trying her hardest to make her relationship she has been in for the last year work, she finally has to admit to herself just where she and her boyfriend are headed…

River prides himself on his leadership and loyalty when it comes to his friends and frat brothers. With an uncertain future in football, school and his personal life, all River can seem to focus on is the girl he so desperately wants.

I really enjoyed the plot of this story, but I did feel that the “revenge pact” aspect was never really something that worked it’s way into this book. The storyline itself was such a slow burn that by the time the two main characters were finally together… I had kind of lost interest. So much of this book consisted of Anastasia dating another dude, that I was left feeling so very little when it came to hers and River’s own connection.

I was genuinely invested in both Anastasia and River’s characters. They were both extremely well written and incredibly interesting. I would have loved to just see the two of them on the own path without the forbidden love aspect throwing a wrench in the progression of this promising love story.

Read more from the Kings of Football!