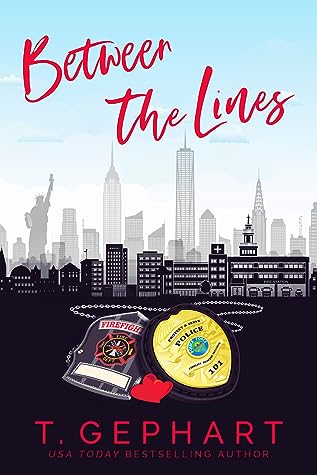 Tessa Ricci knows all about the type of women Justin Tibbs likes to date… and she is the complete opposite of every single one of them. So why is he suddenly showing an interest in her, after seeing her out of uniform and in a dress? Well, she is determined to find out… and there is nothing like satisfying a curiosity like Justin Tibbs… or, at least calling his bluff…

Between the Lines was an entertaining battle of the sexes, with a police officer vs firefighter match! Tessa may be attracted to Justin, but she refuses to fall for being a joke at his expense. But when Justin sees Tessa in a new light, Tessa’s reluctance to give him a chance isn’t going to stop him from showing her there’s more to him than meets the eye…

Tessa has worked hard for her standing in the NYPD, and she doesn’t intend to make any mistakes when it comes to her career. And while fraternizing with an almost-colleague in FDNY shouldn’t be an issue, all bets are off when she and Justin pair up…

This was a cute read which had it’s highly intriguing moments, and some which seemed to weigh the storyline down at times. I loved Tessa and Justin’s initial friction, and their relationship from there seemed to move at a quick pace.

The true magic in this story happened a little over halfway through the book! There were some very juicy developments that happened that I would have looooved to see represented within a greater portion of this story! I loved what happened with the plot from this point on, and I was hooked until the end!!

More from the Hot in the City Series!