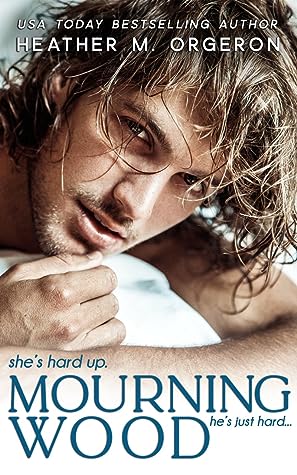 It is long past time for Wyatt Landry to venture out on his own, and for him, that involves a relocation to Moss Pointe, Louisiana. And soon after his arrival, Wyatt finds a job remodeling a chapel… along with a familiar face he won’t soon forget…

Whitney Daigle remembers Wyatt well… and so do her lady parts. After an unforgettable hook-up, Whitney thought she would never see Wyatt again, let alone need his help with her family’s funeral home… but they are in quite the pinch, and Wyatt is nothing if to accommodating…

Mourning Wood was a fun and different read, set within… you guessed it, a funeral home. Whitney and Wyatt once shared a back alley hook-up and then went their separate ways, but now that they are spending their days working alongside each other, the attraction they once acted upon is stronger than ever…

Whitney is a single mother to a unique six year old daughter and the funeral director at her family-owned funeral home. After getting pregnant as an inexperienced teenager, Whitney has limited her relationships to the rare no-strings-attached (or daughters involved), hook-up. That is, until she sees Wyatt again and all of her self-preservation seems to fly right out the window.

Wyatt was raised by his grandparents after he lost his entire family as a young child, and working in a funeral home is just about his biggest nightmare. But Whitney and her family show him how they can accept the deaths that surround them and the comfort and warmth they exude by just being themselves.

This book was cute, funny and just plain different, and at times a little dark when it comes to some of the deaths that are mentioned. There were many fun and quirky moments in this story, especially surrounding Whitney’s adorable and precocious daughter, as well as all of the amazing supporting characters, who brought so much joy and depth to the story! Whitney and Wyatt’s relationship was sweet and sexy, and I loved the strength and understanding they always seemed to have for each other.