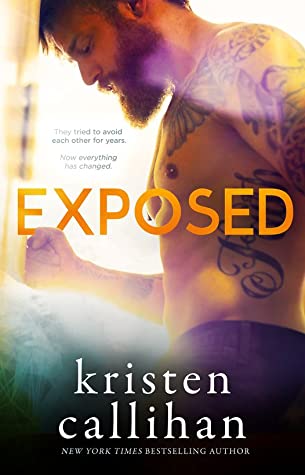 Rock star Ryland Peterson and Kill John band publicist, Brenna James, have spent years hating each other. But while their mutual animosity may hide an attraction that neither one of them had any plan of acting on, one steamy overheard conversation later, and all of their previous excuses suddenly don’t seem to matter so much anymore…

Exposed was a fabulously sexy and incredibly entertaining, rock star romance!! Brenna and Rye have love/hated each other for years, but they have kept their distance for the integrity of the band, and the family they have formed through it. But when Brenna decides she needs more in her life than meaningless hook-ups, Rye is the first in line with a proposal to benefit them both…

I adored Brenna! From her drive to succeed for the band (and herself!), to her unwavering loyalty, and her killer fashion sense, she was an absolutely admirable female character. She was a woman who unapologetically went after what she wanted, and always takes care of the people she loves.

Rye was the super hot and incredibly sweet bass player, who has experienced his fair share of crazy rock star moments. But while he has come to realize that those days are behind him, he has been secretly harboring feelings for the woman who considers him her nemesis…

I loved every single thing about this scorching hot and superbly written book! Brenna and Rye’s relationship was complicated and fun, and I couldn’t get enough of their ensnaring dynamic. I have been eagerly waiting for Brenna and Rye’s story, and it was a perfect addition to the already magnificently addicting, VIP series!

Read more from the VIP series!!