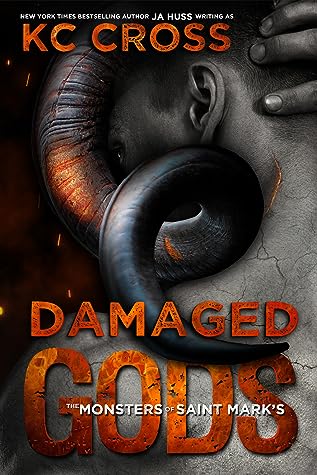 Answering an ad for a seemingly perfect caretaker position, Pie Vita has absolutely no idea of the world that she is unknowingly uncovering when she walks into Saint Mark’s Sanctuary. Gods, monsters, and curses… nothing is what it seems within the magical walls that she is now stuck inside of… indefinitely.

Pell may be known as the Monster of Saint Mark’s, but you try spending 2,000 years cursed to remain within the walls of a magical sanctuary, and see how people view you. Oh, and he may also have horns and hellfire running through his veins… but other than that he is alllllll man…

Damaged Gods introduced the fascinating world of the many Monsters of Saint Mark’s Sanctuary. Pie stumbles into a curse in which she is tasked at solving, but with no magic to speak of and a serious case of the get-me-outta-here’s, she quickly finds herself in over her head. And then there’s the grumpy and always pants-less, Pell… who she can’t decide if she wants to hit… or… nope, she definitely wants to hit him…

Pie has been on her own for many years, and has been called crazy for many more than that. With an imaginary bird as her only company, her life of solitude is about to be severely interrupted by the insanity that is Saint Mark’s. But Pie isn’t the typical caretaker, and her new boss is about to find out that she isn’t the kind of girl who takes well to being told what to do…

The setting for this book was so extremely well visualized that I felt like I was being transported to the sanctuary and it’s many enchanted rooms. The tombs felt dark and disturbing and each scene was so richly described that you could almost reach out and touch it yourself.

Pie was a vastly interesting character who was a strong and unique woman, and who provided much needed comedy relief to her new and very tense living situation. I had many great laughs at the patent offense she took to Pell and his constant pants-less state. I also couldn’t get enough of Pell and his fellow monsters… who knew horns could be… sexy?!

This book was such an intriguing read and has me utterly hooked on what to expect next from the Monsters of Saint Mark’s series!