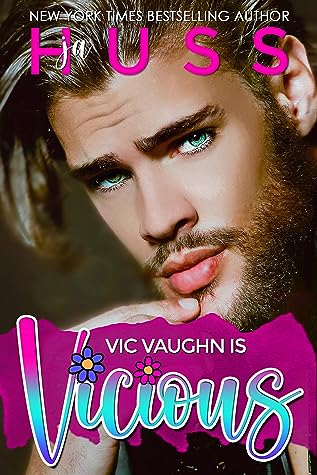 Vicious “Vic” Vaughn hasn’t seen Daisy Lundin in years… and even though they only shared one night together, Vic remembers everything about it… quite fondly. But when Vic runs into Daisy again… he is about to get the biggest shock of his life…

Vic Vaughn is Vicious was a super sweet, opposites attract romance featuring a bad boy with a heart of gold and a single mom used to doing life on her own. Daisy and Vic’s story was entertaining, funny, and of course, steamy… in only the way that the best kind of bad boy can bring!

After losing her parents and the family dairy farm, Daisy and her daughter are starting over. Working long hours and finishing up her degree, Daisy is doing everything she can to give her little girl the life she deserves. But when Vivian one day wanders off, Daisy is going to be forced to deal with the aftermath of her very first meeting with the infamous, Vic Vaughn…

As partial owner of Sick Boyz tattoo, Vic is used to being judged by the town’s plethora of busy bodies. But there is so much more than meets they eye when it comes to the person under Vic’s tattooed exterior. And while he tends to keep his sweet and attentive side under wraps, any lady would be lucky to land Vicious… but there is only one woman that will do…

This was such a great read! I loved the connection that Daisy and Vic shared… every time they met, the whole world just seemed fade into the background. And Vivian was an adorable, super cool six year old, who just happened to steal scene after scene. I always love when this author has a book set in Fort Collins!! Whether the details are fictional or based off of the city itself, as a resident, it’s always a thrill to read it there in black and white. This story was also a treasure trove of previous beloved Huss characters! And while this book is a complete stand alone, it’s character cameos provided an extra special treat for loyal readers!