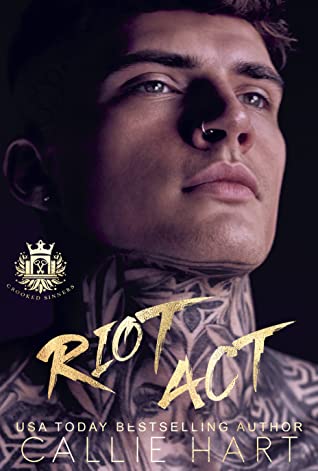 Presley Maria Witton Chase has a very unfortunate crush on the worst of the Riot House boys. Pax Davis is in one word: volatile, and he lives to make his fellow classmates absolutely miserable. But when this damaged bad boy finally meets his match… no one at Wolf Hall could have ever predicted that the timid wallflower would be the one to tame him…

Riot Act was an incredibly sexy and complicated, opposites attract romance. After Presley suffers an unimaginable trauma, the last person she ever imagined being her hero jumps in to save her, and in the process, completely changes her life…

Presley lived in a shell of her own making, afraid to bring attention to herself when it came to her crush, she was content with him never finding out about the feelings that she had for him. I loved the transformation that Presley experiences in this story, although I was heartbroken for her with how she came upon her new outlook on life. I also really enjoyed how flabbergasted Pax is at her complete lack of fear when it comes to him and even his darkest of moods.

Pax may be know as the anarchist of Riot House, but underneath his fearsome glower, he is dealing with some pretty hefty demons. Unwilling to let even his closest friends in, Presley is the only person who has been able to truly see the good man underneath it all.

I enjoyed this book, but I really wished that I could have loved it. For me the story dragged quite a bit in between the major plot points, and I had to work at times to really stay engaged. I did think that the sex scenes were super hot and I believed that they did so much to further the connection between Presley and Pax. There were also quite a few jaw dropping moments in the plot that I was not expecting!

As the Crooked Sinners series comes to a close and the three men of Riot House have found their unpredictable HEA’s, the ending of their high school careers signals only the beginning of the brilliant and finally, happy futures that they all have laid out before them…