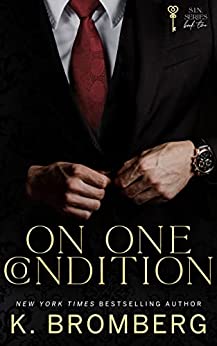 Ledger Sharpe never imagined returning to Cedar Falls, Montana, or that the girl he left behind would still be there… not waiting for him.

Asher Wells once had big dreams for her future, but life happened and she returned to Cedar Falls, and the lavender farm she grew up on. And while Asher may seem the like the same small town girl that Ledger once knew, the young love they shared was shattered many years ago…

On One Condition was a sentimental and sexy, opposites attract, second chance romance! Asher and Ledger met as teenagers and spent their summers falling in love, until the ultimate betrayal tore their burgeoning relationship apart. Now, years later Ledger returns to where he and Asher fell in love and realizes just how much of his heart he has been missing in the years since they last saw each other…

This book was a highly entertaining and engaging read. I loved Asher, she was such a strong and admirable character, who pushed her own dreams aside to take care of her grandparents, the two people who were her entire world.

Ledger was the kind of character who seemed like he would be in need of some massive redemption, but the more we got to know him, the easier it was to love him for who he was. His desire for only living in the city and working hard on his business deals quickly took a back seat to the connection that he shared with Asher. But while their love is once again burning hot, the fact remains that while Ledger belongs in NYC, Asher’s life is in Cedar Falls…

This was my first book in the S.I.N. series, where I met the second brother of a handsome and successful, triplet group! I loved the relationship that Ledger and his brothers shared, and with two of the siblings now having found love, there is one more Sharpe left to fall!

Read more from The S.I.N. series!!