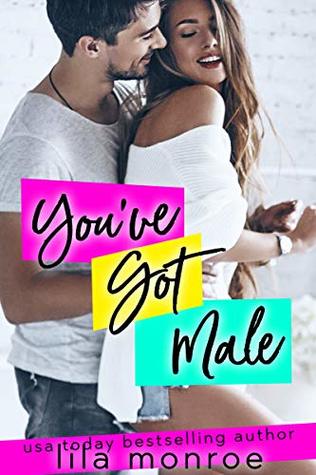 Zoey Rafferty has poured her heart and soul into making her brunch themed food truck a success. She loves everything about her business and is enjoying having a constantly  thriving work day… until the competition parks his rival food truck a little too close for comfort.

Cameron Donnelly makes no apologies about going after what he wants, full speed ahead. When the uptight competition approaches him about “rules” and “schedules”, he makes it very clear that he doesn’t have time to worry about hurt feelings when it comes to business.

Two brunch spots, one war that is about to get ugly… and the two rivals who can’t seem to stop thinking about each other…

You’ve Got Male was an entertaining and super cute story set in the world of a major food truck competition. With a culinary style war that is waged between people who love to hate each other, the food isn’t the only thing that ends up being served hot.

Zoey is a classically trained chef who has turned her love for exquisite food into an accessible commodity. Content with the growth of her business, when her comfortable success is threatened by a loud and brash competitor, she figures reasoning with him will help him see the light… boy, is she wrong.

Cam has spent his time in the cooking trenches and he is ready to make something of himself, on his own terms. So when his business is the slightest bit threatened, he overreacts instead of taking Zoey’s ideas into consideration. But, by the time his rivalry with Zoey is in full force, he starts to second guess his declaration to fight fire with fire.

Zoey was such an amazing woman. I admired her attempts to be an adult about her issues with Cam. She was always straightforward and refrained from playing too dirty.  Unfortunately, I can’t say the same for Cam. He was such an unlikable character throughout the entire book, that I just couldn’t bring myself to feel any kind of warmth for him whatsoever.

I really enjoyed this storyline and the writing in this story. Fun and sexy, if the male lead had been a lot less of a clueless jerk, I definitely would have loved this book.