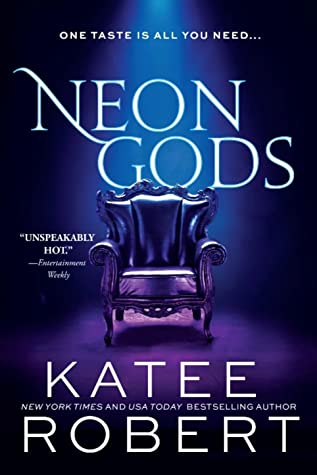 Persephone Dimitriou has a plan to escape the politics and toxicity of Olympus high society, and she only has a few short months left of biding her time until she can put her plan in motion. And then the unthinkable happens, an arranged engagement to the repulsive and dangerous, King of Olympus, Zeus.

With no time to think, and danger chasing her down, Persephone runs… right into the arms of the underworld, and it’s mythical ruler, Hades.

Neon Gods was an innovative and sultry take on the fabled Greek Gods of Olympus. Persephone and Hades’ story has been told time and time again, but never with such a sexy, intriguing and suspenseful plot and storyline.

This book was the utterly addictive and incredibly alluring story of Persephone, a woman who wants to leave Olympus behind but is being forced into a dangerous situation in which she has no control. She finds herself at the mercy of Hades, a man who was believed to be a myth, but in reality was a reclusive yet honorable man. Their goal is the same, and their connection is undeniable, so Persephone and Hades set out on showing Olympus society just how far they’ll go to thumb their nose at Zeus and his simpering followers…

I absolutely loved this first book in the Dark Olympus series, and I am so incredibly excited to see what is in store for the next Olympus couple. I was fascinated by the premise in which the roles of the Gods are filled with a new member upon the death of the previous representative, while at the same time, heartbroken for poor Hades and the way he inherited his position. The scorching hot relationship between Persephone and Hades pulled me in, but the acceptance and love they find with each other held me completely enamored with this unforgettable read.